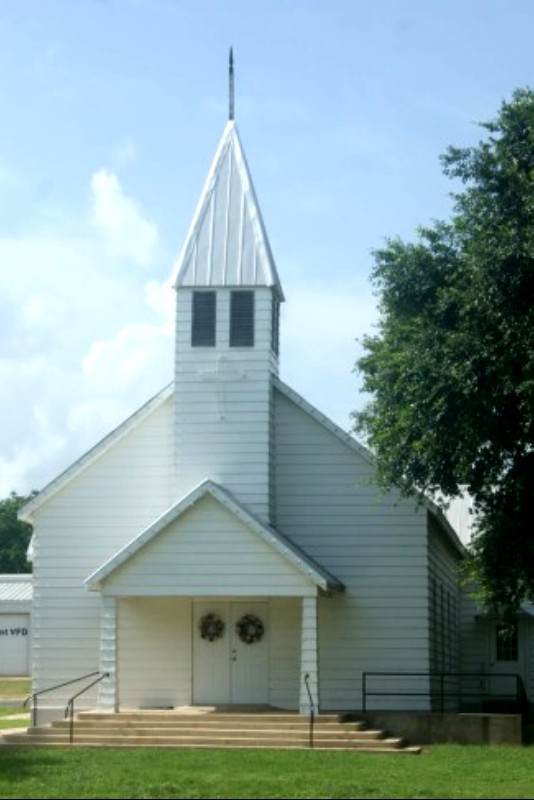 Belmont, Texas is located at the intersection of Highway 90A & Highway 80, 59 miles south of Austin & 59 miles east of San Antonio.  Just west of Gonzales, where the first shot was fired in the battle for Texas Independence.

Belmont was established 1848 and in 1885 had a sawmill, a cotton gin, a school, two churches, daily mail service, and a population of 100. Read more on Belmont’s history at TSHA 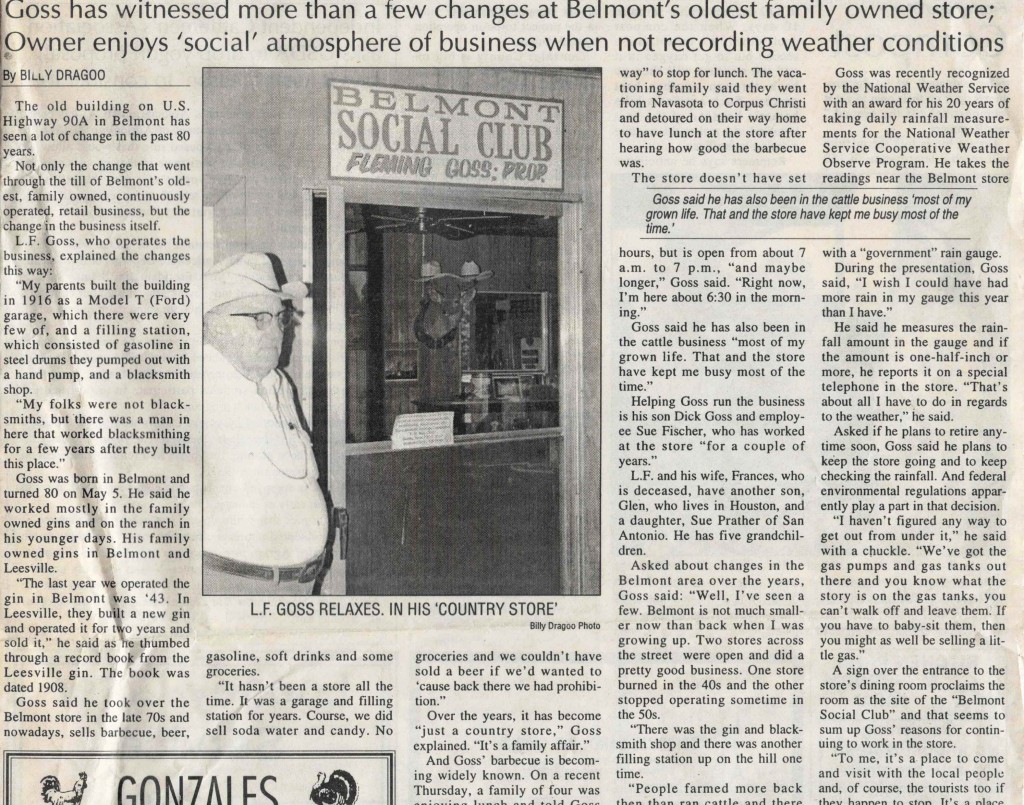 The old building on U.S. Highway 90A in Belmont has seen a lot of change in the past 80 years.

Not only the change that went through the till of Belmont’s oldest, family owned, continuously operated, retail business, but the change in the business itself.

L.F. Goss, who operates the business, explained the changes this way:

“My parents built the building in 1916 as a Model T (Ford) garage, which there were very few of, and a filling station, which consisted of gasoline in steel drums they pumped out with a hand pump, and a blacksmith shop.  My folks were not blacksmiths, but there was a man in here that worked blacksmithing for a few years after they built this place.”

“The last year we operated the gin in Belmont was ’43.  In Leesville, they built a new gin and operated it for two years and sold it,” he said as he thumbed through a record book from the Leesville gin.  The book was dated 1908. 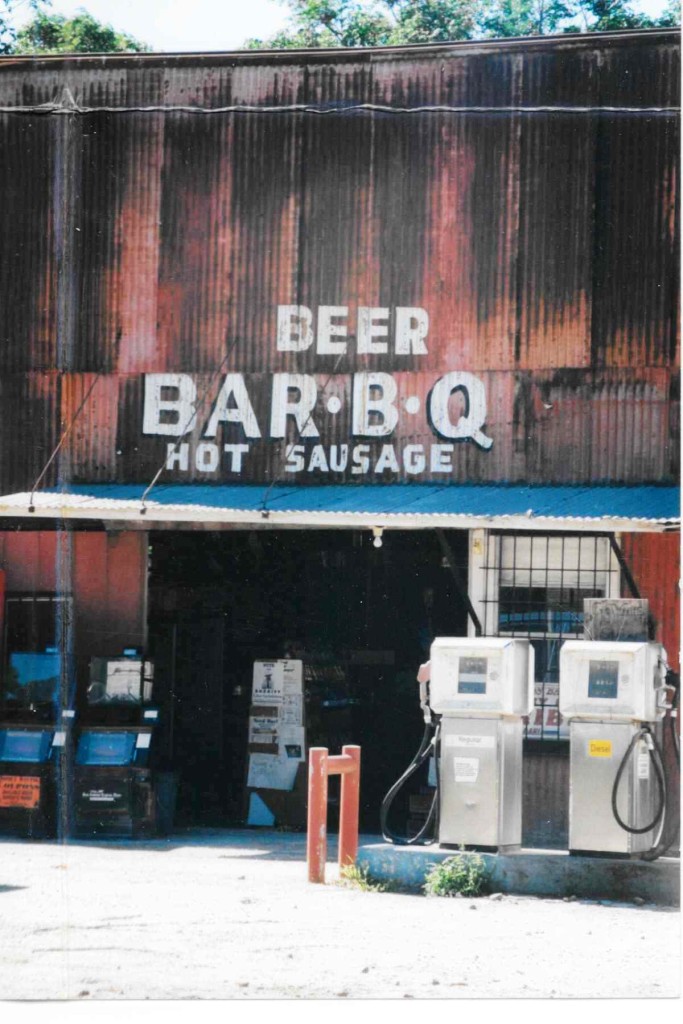 Goss said he took over the Belmont store in the late 70s and nowadays, sells barbeque, beer, gasoline, soft drinks and some groceries.  “It hasn’t been a store all the time.  It was a garage and filling station for years.  Course, we did sell soda water and candy.  No groceries and we couldn’t have sold a beer if we’d wanted to ‘cause back there we had prohibition.”  Over the years, it has become “just a country store,” Goss explained.  “It’s a family affair.”

And Goss’ barbecue is becoming widely known.  On a recent Thursday, a family of four was enjoying lunch and told Goss they had taken “a roundabout way” to stop for lunch.  The vacationing family said they went from Navasota to Corpus Christi and detoured on their way home to have lunch at the store after hearing how good the barbecue was.

Goss said he has also been in the cattle business “most of my grown life.  That and the store have kept me busy most of the time.”

Helping Goss run the business is his son Dick Goss and employee Sue Fischer, who has worked at the store “for a couple of years.”  L.F. and his wife, Frances, who is deceased, have another son, Glen, who lives in Houston, and a daughter, Peggy Prather of San Antonio.  He has five grandchildren. 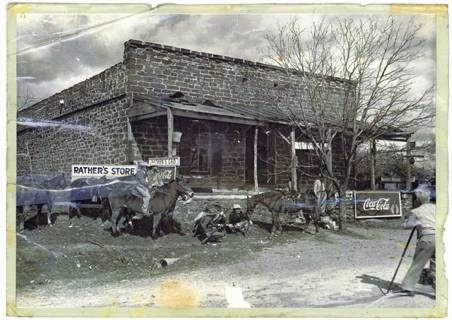 Asked about changes in the Belmont area over the years, Goss said: “Well, I’ve seen a few.  Belmont is Rather Storenot much smaller now than back when I was growing up.  Two stores across  the street were open and
did a pretty good business.  One store burned in the 40s and the other stopped operating sometime in the 50s.  There was a gin and blacksmith shop and there was another filling station up on the hill one time.  People farmed more back then than ran cattle and there were more people around here.”

During the presentation, Goss said, “I wish I could have had more rain in my gauge this year than I have”.  He said he measures the rainfall amount in the gauge and if the amount is one-half-inch or more, he reports it on a special telephone in the store.  “That’s about all I have to do in regards to the weather,” he said.

Asked if he plans to retire anytime soon, Goss said he plans to keep the store going and to keep checking the rainfall.  And federal environmental regulations apparently play a part in that decision.

“I haven’t figured any way to get out from under it,” he said with a chuckle.  “We’ve got the gas pumps and gas tanks out there and you know what the story is on the gas tanks, you can’t walk off and leave them.  If you have to baby-sit them, then you might as well be selling a little gas.”

A sign over the entrance to the store’s dining room proclaims the room as the site of the “Belmont Social Club” and that seems to sum up Goss’ reasons for continuing to work in the store.