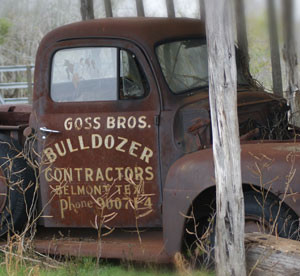 Goss Garage was built in 1916 and operated by P.H. Goss and his three sons. In 1923, the garage partially burned and it was rebuilt the same year. The garage handled Fisk and Goodyear tires and even some Model T Fords were sold there. Gulf gasoline was hauled from Gonzales in barrels when the garage first started business and was sold there for the next 64 years.

In the late 1920s, the road between Gonzales and Sequin was paved, replacing the gravel road through Belmont. In 1950, the highway was widened and the garage was moved back the width of the garage. At that time the pit, which was used to work on cars was covered and the forge was removed. When the garage was first opened, mechanics were available to work on cars, farm equipment, etc. Gradually, this work was no longer done and it became a service station although it was always called Goss Garage. Groceries were added and later barbeque was sold.

Sunday mornings, especially, found all the old timers gathering at the Garage to find out all the happenings which had been going on all week. Many tales, some not quite so exact, were told around the old wood stove during the cold winter days.

P.H. Goss was born in Tennessee in 1854 and came to Belmont by horseback around 1870. He married Lula Franks and they had 3 sons. In 1890, they built the house which is still standing at the intersection of Highways 90A and 80. It is now the residence of R.F. (Dick) Goss and Shirley. 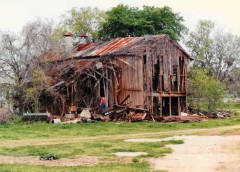 Most of the material used to build the gin was shipped by rail to Luling, Texas and was hauled by mules and wagons to the location in Belmont. The sheet iron used to cover the gin was hauled from New Braunfels by mules and wagon by Mr. C.T. Rather, Jr., whose uncle, C.T. Rather, built and operated the Rather’s Store in Belmont. The original boiler for the gin was hauled from Luling but in 1918 had to be replaced. The new boiler was hauled from Gonzales on a special wagon drawn by 10 pair of mules. The story goes that when the team got to the River Bridge in Gonzales, it was decided that part of the team would be unhitched and cross the bridge with a lighter load. The driver, one France Scallion, got excited when he got to the bridge and instead of stopping the team, popped his whip and all the mules, wagon and boiler made the crossing without mishap.

The gin operated continuously until 1943 when it was no longer operated. In 1942, a Gulf hurricane came through the area and ruined all the cotton crop and very little cotton was ginned that year. Many bales of cotton were ginned during a season and it was the custom that after the 1000th bale was ginned, the steam whistle was started and kept going until the population could not stand the sound of the whistle any longer. Wood was burned in the gin and it took cords and cords. Wood was cut in the pastures by axe and hauled to the gin by wagon and mules until later years when a truck was used to haul the wood.

Most of the seed and cotton was baled and hauled to Gonzales by wagon in the beginning.  It was hauled to the Oil Mill and the Compress. Wagons were loaded the night before and the driver would leave before daylight, taking the whole day to make the trip.  He would bring back groceries and supplies for the General Store in Belmont.  Along with the cotton gin, there was a Mill which ground corn and made either coarse or fine meal.  This was used for human consumption as well as chicken feed and hog feed.  The Mill was a rock mill, not steel, and about once every 2 years had to be taken apart and the rocks chipped since after being used for a long period of time the rocks became smooth.  So, chipping the rocks was like sharpening them.  The gin was torn down around 1983, but part of the old steam engine & drive wheel still remain in their original place today. 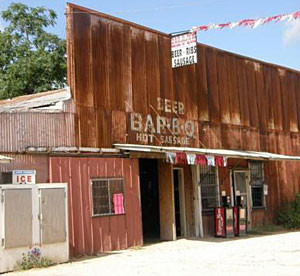 P.H. Goss died in 1931 and his 2 sons, Luther and Pete, operated the gin, farm and Garage. After the death of Luther in 1962, the Garage continued to be run by Pete and Luther’s son, Fleming. Fleming also raised cattle with his brother Leroy for years. The Goss family cattle brand, ‘Diamond A’, was first used in the early 70s throughout the Belmont area in Gonzales County.

Fleming and his son, Dick, worked together and ran the Goss Garage from 1982 until Fleming’s death in 2009. They started the tradition of Goss Bar-B-Q in the early 70s. There was a black smoke pit and brisket, chicken, ribs and sausage along with locals could be found on any day of the week. In the mid-80s, the dining room was enclosed and air conditioning was added. A sign was painted as a birthday present for Fleming & posted above the entrance that read, “BELMONT SOCIAL CLUB – Fleming Goss, Proprietor”. The family sold the Garage in 2011 but it is still known to locals as the Belmont Social Club.

To carry on the family tradition, a new store, Diamond A ~ Goss Bar-B-Q, has been erected on the corner of the Belmont Intersection. It was built and is being run by Dick and Shirley Goss, their two daughters, and their families, including the 5 great-great-great grandchildren of P.H. Goss.